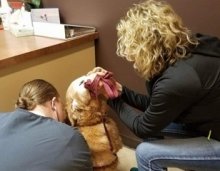 It was Friday morning. We woke early, piled in the car and made the trek to Madison. It was time for Sammy’s consult with Dr. Shiu. As I watched Sammy limp into the office, I prayed for relief. Relief for us both.

While we waited for Dr. Shiu, I prayed he’d say Sammy had an injury and not cancer. I prayed he’d say it was something other than osteosarcoma – anything else. It took only moments for the original diagnosis to be confirmed, then the if/then options came. Amputation if the cancer had not spread. Palliative care if it had. The options for palliative care – radiation, bone strengthening, chemotherapy, pain medication.

I’m a person who in crisis needs as many details as possible to process next steps. As Dr. Shiu spoke, I peppered him with questions. While my head and heart were spinning, I was certain of one thing – any decision about Sammy’s care was mine. Dr. Shiu and his team were not there to tell me what to do. I wasn’t obligated to a particular treatment protocol. I could (and would) do only what was best for Sammy to care for her physically and emotionally.

We decided on three procedures for that day – a biopsy for an additional confirm of osteosarcoma and put Mom’s data-loving mind at ease, a CT scan to determine if there was metastasis in Sammy’s lungs, and a bone strengthening treatment called Zoledronate. Zoledonrate would be administered while Sammy was under for her biopsy.

Sammy happily headed back with the staff and I distracted myself with errands. I was putting an incredible amount of trust in this team. Although I was nervous and uncertain about so much, I knew we would have a better sense of where this cancer was and support the bone that was causing so much pain.

I received a call that Sammy was ready to go home. I rushed to the clinic, eager for information. Dr. Shiu had pulled cells for the biopsy, the results of which we’d have in a few days. He invited me back to his desk to review the CT scan. He did not see any obvious lung mets, but we’d know more after a radiologist reviewed the CT. Until then, we’d see how the bone strengthening treatment worked and increase one of Sammy’s pain medication.

I left that day feeling settled. Not calm but settled. There were still a few things we didn’t know. Once we had the CT results back and biopsy confirmation we could confidently choose her care. I met some amazing people in the medical staff and others who were at the clinic waiting for their appointments. I felt like I was part of a family. A family that would have my back. A family that understood. A family that held a badge of honor that none of us wanted but wore proudly. 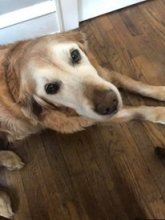 It’s hard to tell exactly what the x-ray is revealing,” said Dr. Laura Beck, our primary vet. She was sure it was suspicious, but not obvious enough to be diagnosed as osteosarcoma. Dr. Beck suggested forwarding Sammy’s x-ray to a radiologist for a second review. On Sammy’s 14th birthday, March 1, 2018, Dr. Beck called to share that the radiologist also felt the x-ray was inconclusive. Dr. Beck and I agreed that all other symptoms supported the diagnosis of osteosarcoma (significant limp, swelling and pain to the touch in the affected leg).

After hearing Sammy’s preliminary diagnosis of osteosarcoma, I lost hope. I can’t say it any other way. I didn’t know much about osteosarcoma. I did know it was a painful, aggressive and ugly cancer. I was sure it would be days or weeks before she was gone – a month at most. I threw my emotional hands up in the air and decided we would simply keep her comfortable. For me that meant keep her comfortable at home, dose pain meds and wait for the pain to take her. All the while, managing the experience for Sammy and the rest of the family.

Sammy is the eldest member of my large and happy pet family. Cora is my eight-year-old Bernese Mountain Dog. Cora became my baby as a puppy does not know life without Sammy. Henry is my seven-month-old Bernese Mountain Dog who loves his big sister Sammy. They wrestle together, and Sammy does a great job of keeping her sassy puppy in line. Let’s not forget the two cats and Sammy’s step brother, my boyfriend’s hunting dog.

During the first few days following the preliminary diagnosis, I spoke often to my good friend Beth. To say I spoke may be a stretch. I rambled, ranted and blubbered. She knew osteosarcoma far too well and understood everything I was experiencing. During these early days Beth gently offered to share Sammy’s x-rays with Dr. Shiu. I’d heard Dr. Shiu’s name through many circles and knew he was an incredibly skilled oncologist. On a Sunday evening I forwarded to Beth Sammy’s x-rays, asking if she’d pass them along to Dr. Shiu. My hope was to get his feedback on the x-ray and to find out if there were additional or other pain meds Sammy could take to minimize her pain. That was all I was looking for.

Two days later – it was a Tuesday – Dr. Shiu and I spoke. He shared options. What the next steps could be. Dr. Shiu was very clear – Sammy won’t be cured, but we could do some things in addition to her pain medication to make her more comfortable. He suggested bringing Sammy in for an evaluation. And it so happened that Dr. Shiu had an opening three days later – on the same day I’d be heading to Madison from our home in Appleton.

After expressing to Dr. Shiu my gratitude, I hung up the phone. A massive sense of relief came over me. Although there were many unknowns, I had more information. I knew I was in good hands. 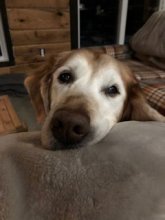 On a fall day in 2009, my then husband sat down across from me in my home office. He shared that he’d run into a former work friend earlier that day. That friend and her family had come to a difficult decision – it was time to rehome their five-year-old Golden Retriever. The family loved their dog enough to know they didn’t have proper time for her and she could have a different life with another family. My former husband had been wanting a dog and I could see this was important to him. Soon after, we went to meet Sammy. On November 2nd, 2009 – my 37th birthday – Sammy joined our family. Little did I know she would be my greatest gift.

Sammy is a spirited, talkative, sassy girl with a huge personality. She loves to hot lap around the yard, bark at me for anything and everything and is a master food stealer. I’ll be honest, she’s driven me crazy more times than I care to admit. She’s tested my patience. She’s made some days very frustrating. Even today she continues to keep me on my toes.

In late January 2018 I had a sense something was happening with Sammy. There weren’t significant symptoms. Maybe it was Mommy Instinct. A few weeks later Sammy developed a limp. I chocked it up to Sammy being a senior dog who enjoyed a good wrestle with her puppy brother. I cut her activity and waited for it to resolve. It did not. On February 27th – two days before Sammy’s 14th birthday – our primary vet shared her preliminary diagnosis. Osteosarcoma.

This is our story. A story of a pet parent and her senior dog. A story of managing her illness, enjoying life, maintaining normalcy for the pet family and the human family. A story of unbelievable pain and incredible joy. A story of appreciating each day and taking a journey one step at a time.

Want to help a dog (and family) in need? Here is how you can help with our Woof & Meow Packs.

Links for support group information, as well as books and articles on anticipating the loss of your pet, and other resources. 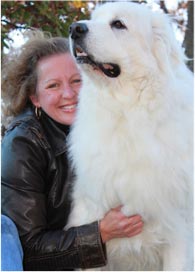 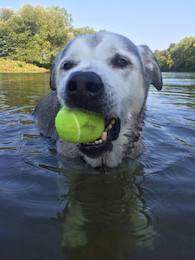 "When my Sammy was diagnosed with Osteosarcoma, I thought my world would end. I was terrified and felt hopeless. The Czar's Promise family understood it all.  I had people to talk with who understood my journey like nobody else did. And they helped me process through Sammy's treatment options so I could make the best choices for her and our family."
—Dana Zurbuchen—
"I have been through the unbearable pain of losing my precious Goldendoodle, Gryffindor to canine cancer and find comfort in knowing 'Czar's Promise' will provide that much-needed education, funding, and support to those in our local community. It honors all those who have lost loved ones to cancer, and those who may be experiencing that hurt and uncertainty. Czar's Promise will be there to let others know you are not alone and provides a rainbow of hope for the future!"
—Christine Kober—
"Brady and I were fortunate to have the BEST veterinary oncology team in our own back yard. Through our terrible journey that was Osteosarcoma, Brady and I made life long friends, and I am blessed to be part of an organization that is so personal and important to me and doing remarkable work. Brady touched so many lives all over the world and was an inspiration to all that knew him. To Dr. Shiu, his staff, Beth Viney and everyone at Czar's Promise, thank you! I love you all!"
—Melanie Powers—
"When I found a small toe mass on my 3 year old, running partner Rogue’s foot that was confirmed Malignant and Aggressive Digital Melanoma, I was devastated and confused. Although the cancer diagnosis was incomprehensible, the excellent care, counsel and treatment we received from Dr. Shiu, Dr. Singh, and the entire care team gave us more than we expected...no more cancer! I am so happy that we have our very own refreshingly local support group, Czar’ Promise to continue awareness, education, and promote healthy lifestyles for people and their pets who have been touched by cancer. Thank you for what you're doing."
—Dr. Laura Oxley, Healthy Pet—
"Czar’s Promise has given me the invaluable gift of time, of another morning of snuggles, and another long evening walk. There is nothing more precious or worthy of cherishing than our time with loved ones, and I cannot convey how much this will forever mean to me. From the depths of my heart, I thank you all at Czar’s Promise."
—Kathleen Thompson—